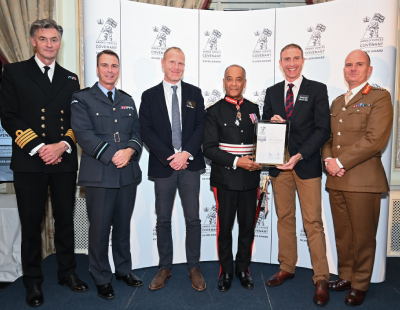 The accolade recognises outstanding support for the Armed Forces.

The London-based agency brand signed the Armed Forces Covenant in 2021, expressing a commitment to align the business to support HM Armed forces personnel and their families, offering employment and supporting their defence commitments.


Daniel Cobb was last week selected to win this year’s Silver Award alongside big brands including M&S, Bank of England, NHS and Reed.

Over the past 5 years, Daniel Cobb Estate Agents has been working closely with the charity Building Heroes.

The charity offers a five-week course in residential property maintenance for anyone associated with the Armed Forces.

On the back of this Daniel Cobb has employed a number of ex-military personnel passing of the course to its in-house maintenance service.

George Cobb, managing director for Daniel Cobb has been part of HM Army Reserve for more than 22 years and said signing the covenant is something he has always been passionate about.

He said: “I know first-hand the challenges this can have on work and family.

“Most importantly what I have learnt and experienced over the years is the immeasurable value a member of HM Forces can bring to a civilian organisation.

“The values and standards of our Armed Forces are an excellent foundation for any civilian employer, where the work ethic, sense of team and high performance you won’t find anywhere else.”

He said there are two important aspects to employing HM Armed forces, adding:“The first is what they can bring to the table; an attitude of mind that is all about delivering an output, on time and to the highest standards.

“Selflessness, personal pride in their work and a strong sense of team are everyday business for the forces.

“All attributes as employers we would take in a heartbeat.

“The second important aspect is, as an employer you need to orientate your business such that you can provide the right environment to support and nurture armed forces personnel making the transition, as the cultures are different.

“Coming from an organisation that is focused on warfighting and defending our country to then transition to an industry like ours will be a culture shock. Adopt a train and nurture approach in supporting that transition and you’ll have a member of your team who will go the extra mile every day of the week.”

Peter Germain, chief executive of the Reserve Forces and Cadets’ Association for Greater London, added: “These awards recognise the outstanding support for our Armed Forces from employers across the UK and I would like to thank and congratulate each and every one.”